I have thought about writing a post several times over the last 17 days, but I couldn’t find the proper words.

We celebrated our engraftment on December 27, 2015.  The few days following were overall uneventful with regard to health and progress.  Lots of family visited and loved on Khaleda.  She got fancy pink wedge converse.  Who ever thought up that idea? 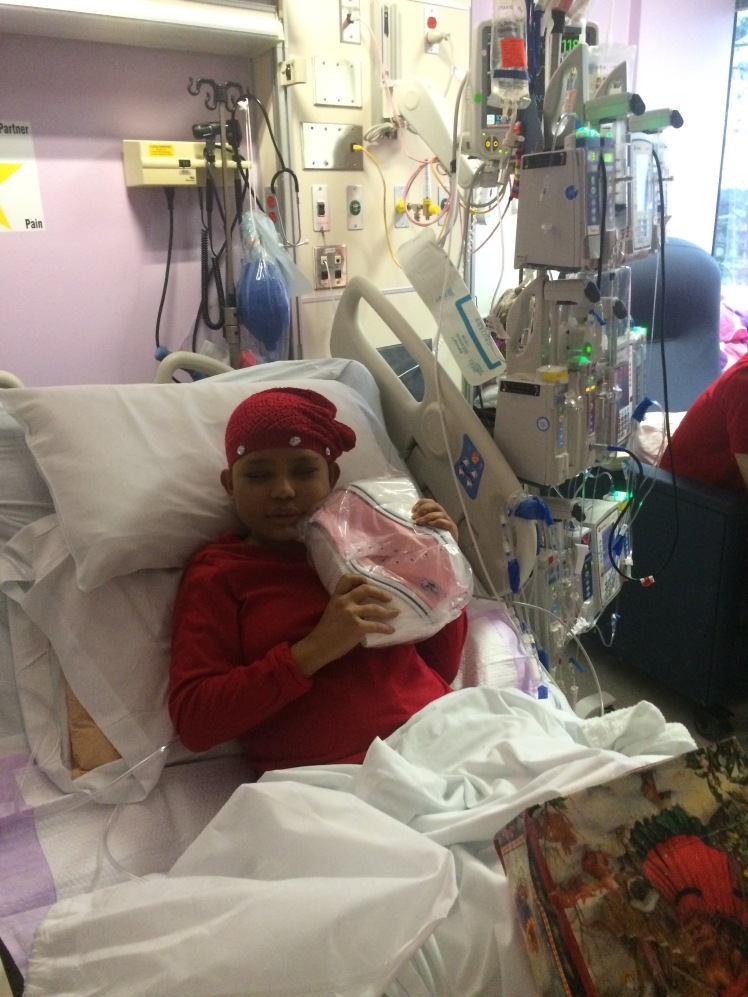 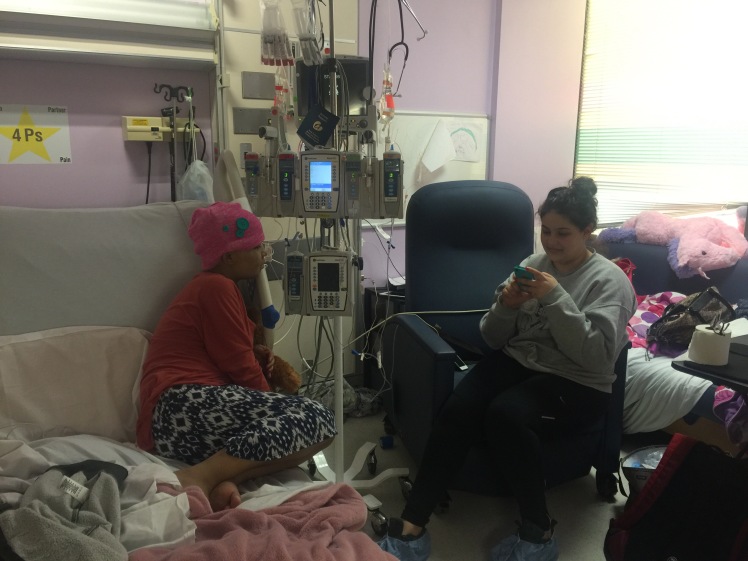 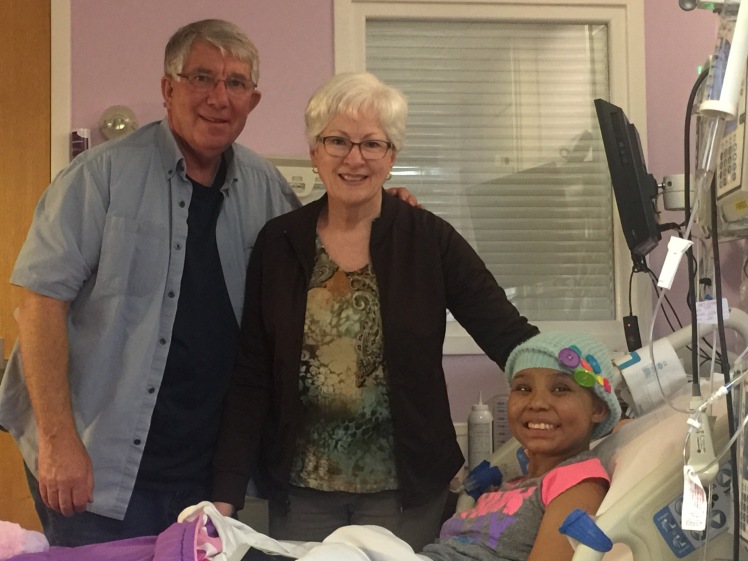 On New Year’s Eve, Khaleda and I toasted sparkling grape juice from fancy plastic cups in room 5207 – our home away from home.  When the ball dropped, we toasted Happy New Year followed immediately by my singing  “Happy Birthday.”  January 1st wasn’t only our fresh start to a whole new year but also Khaleda’s birthday.  Poor kid has spent Thanksgiving, Christmas, New Year’s Eve, and her birthday in her hospital bed.  Our child life group works hard to make birthdays on the unit special.  They decorated the activity room and had a local bakery make a beautiful and special cake.  I told her to relish the moment because she wouldn’t have another cake like that until her wedding:). Decorations included notes sent by friends and family completing the sentence – Khaleda is•••• 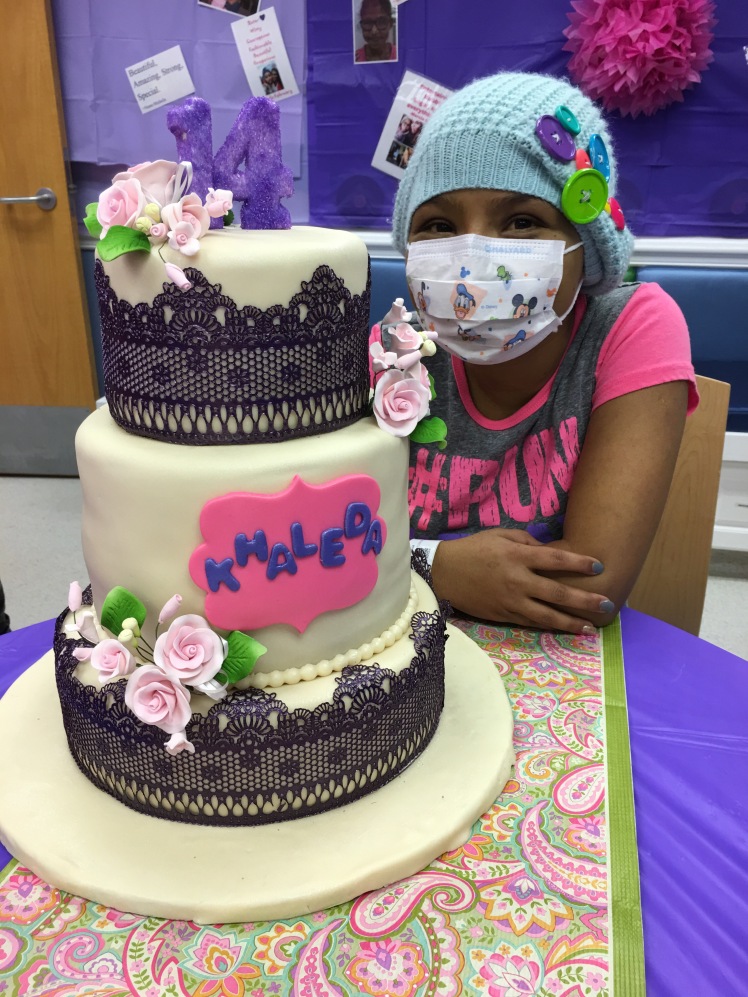 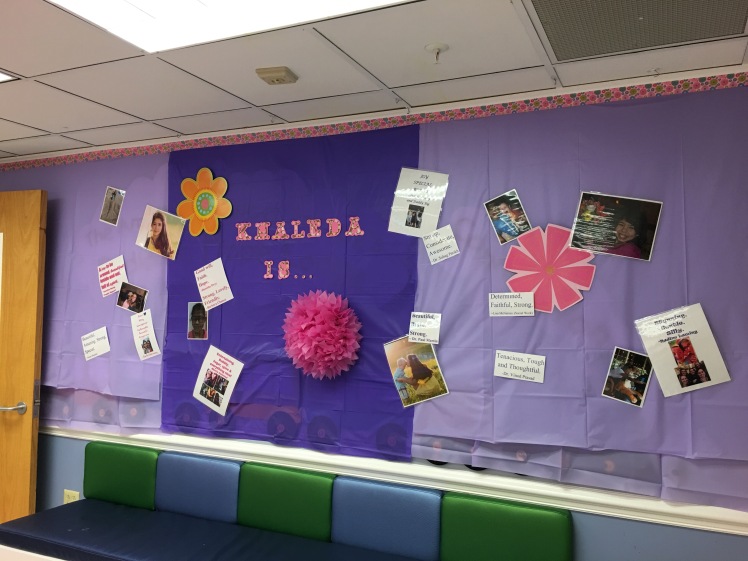 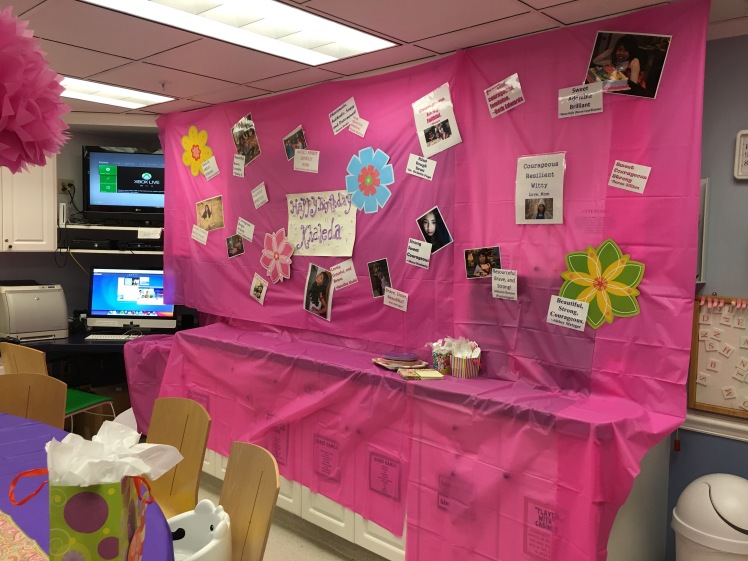 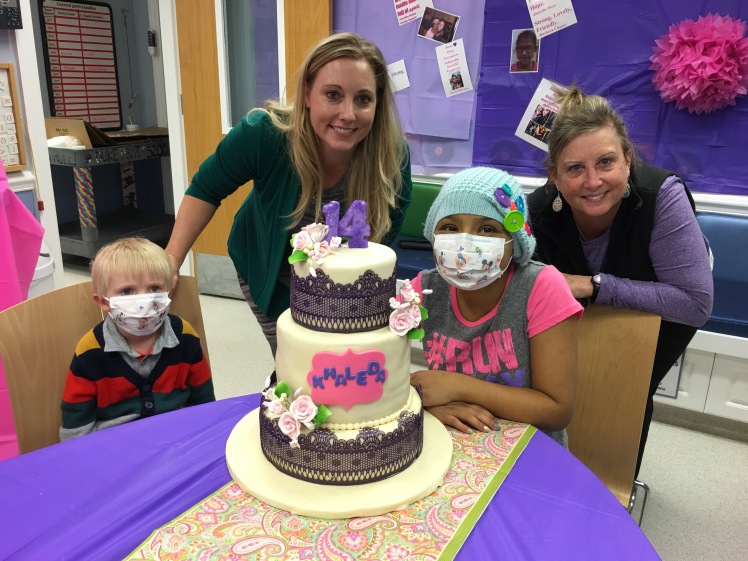 Typically, engraftment gives the hope that there is an end in sight.  Since a confetti party is top on Khaleda’s wish list, we hung a “goal” calendar in our room highlighting a range of possible release dates.   For those of you who haven’t followed us, on release from this unit everyone lines the halls to throw confetti as patients make their exit.  Lots of energy is focused on getting off this unit.  I can’t blame her for wanting a “goal calendar” as this place makes me a little insane as well.  Yesterday (day 53) was highlighted as the first possible release date on the “goal” calendar.  Unfortunately,  we didn’t hit that target. 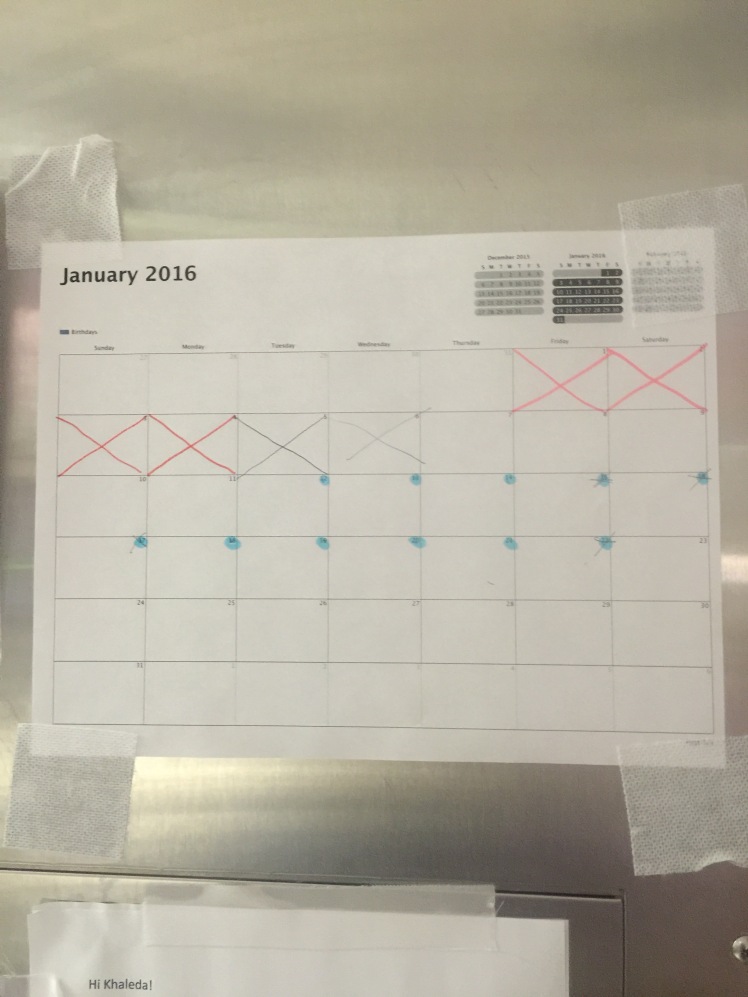 It has been a roller coaster ride of ups and downs.  The symptoms of withdrawal from pain medications have likely left an aversion to any unnecessary medications or substances for the remainder of her lifetime.  High dosages of steroids introduced her to a plethora of less than desirable symptoms which she would love to erase from memory.  As medications are minimized and she has clearer thoughts,  the mind has become an emotional battlefield.  We have to remind her to take each thought captive and quickly uproot the weeds.  Any activity to keep our minds busy is important. 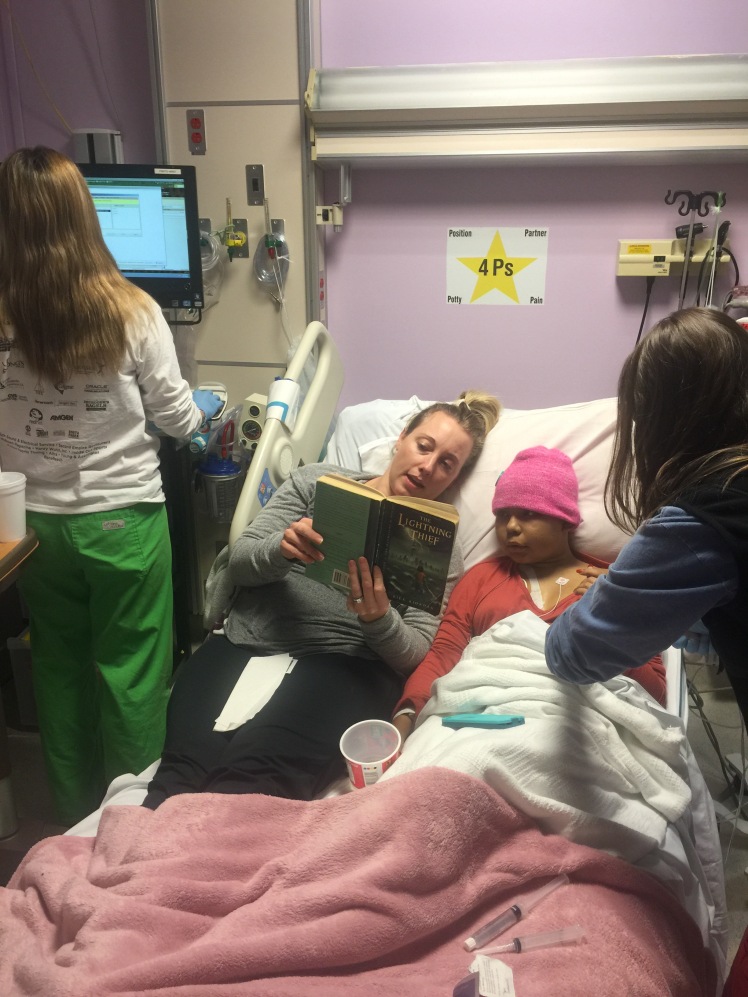 New challenges have presented in the past few days.  Khaleda developed severe hemorrhagic cystitis (bladder bleeding) which resulted in another surgery yesterday.  Her white blood cell count started to drop significantly this week. A rapid decline in this fashion has left the team concerned about bone marrow graft failure.  The cause is likely from having too few stem cells from the donor sample.  The necessary treatment for such graft failure is to harvest more stem cells from the donor (Khaleda’s biological brother).  If you have been reading our blog then you can understand our delimma and the immensity of such a challenge.

Today, I have sat in this hospital room watching my daughter fight for her life physically while I fight for her life in a different way.  Securing approval for her brother to travel here to donate more cells is our mission.  We have unsuccessfully attempted this three times in the past and travel to another continent is not an option this time.  Conversations have been had with representatives in the offices of our senators and our governor, an immigration attorney, and other key people in government positions and organizations all over our country and world.  Dear friends and family (thank you in particular to Marta, Kirsten, Lauren and Morrie to name a few) have spent a great deal of their time reaching out to anybody and everybody that knows anybody willing to help.  We have made progress and the hearts of many people have been moved by our story.  The display of compassion has brought me to tears.  The far reaching impact has been humbling.

Once again, we find ourselves desperate for prayers.  We need the hearts of the decision makers to move in our favor to issue travel documents.  White blood cell counts need to grow, bleeding must resolve, and the liver should continue to heal for those of you who love to pray specifically.

There are many tears, sleepless nights, and stomach ulcers; however, we continue to remain steadfast in prayer and faith. 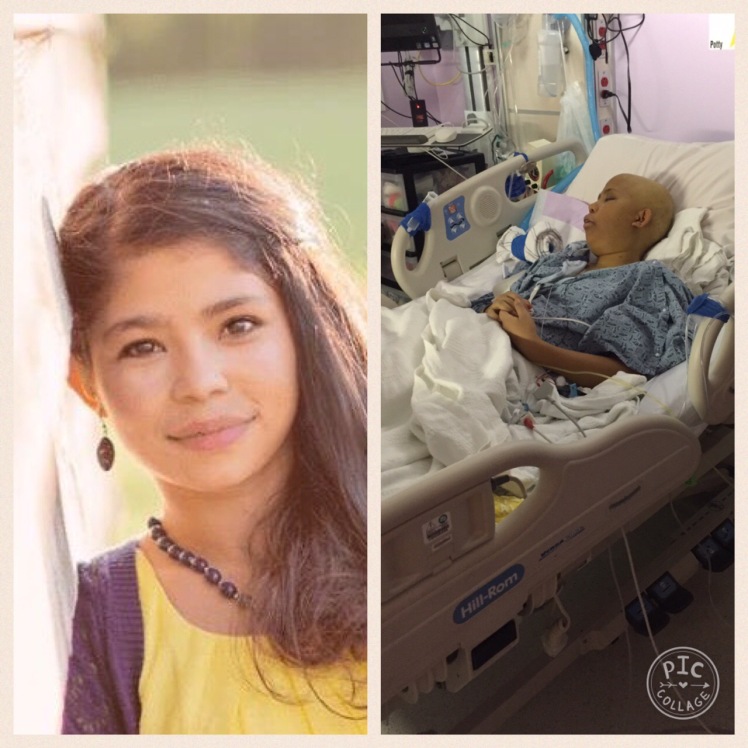